Mater Dei pushed to breaking point due to COVID surge 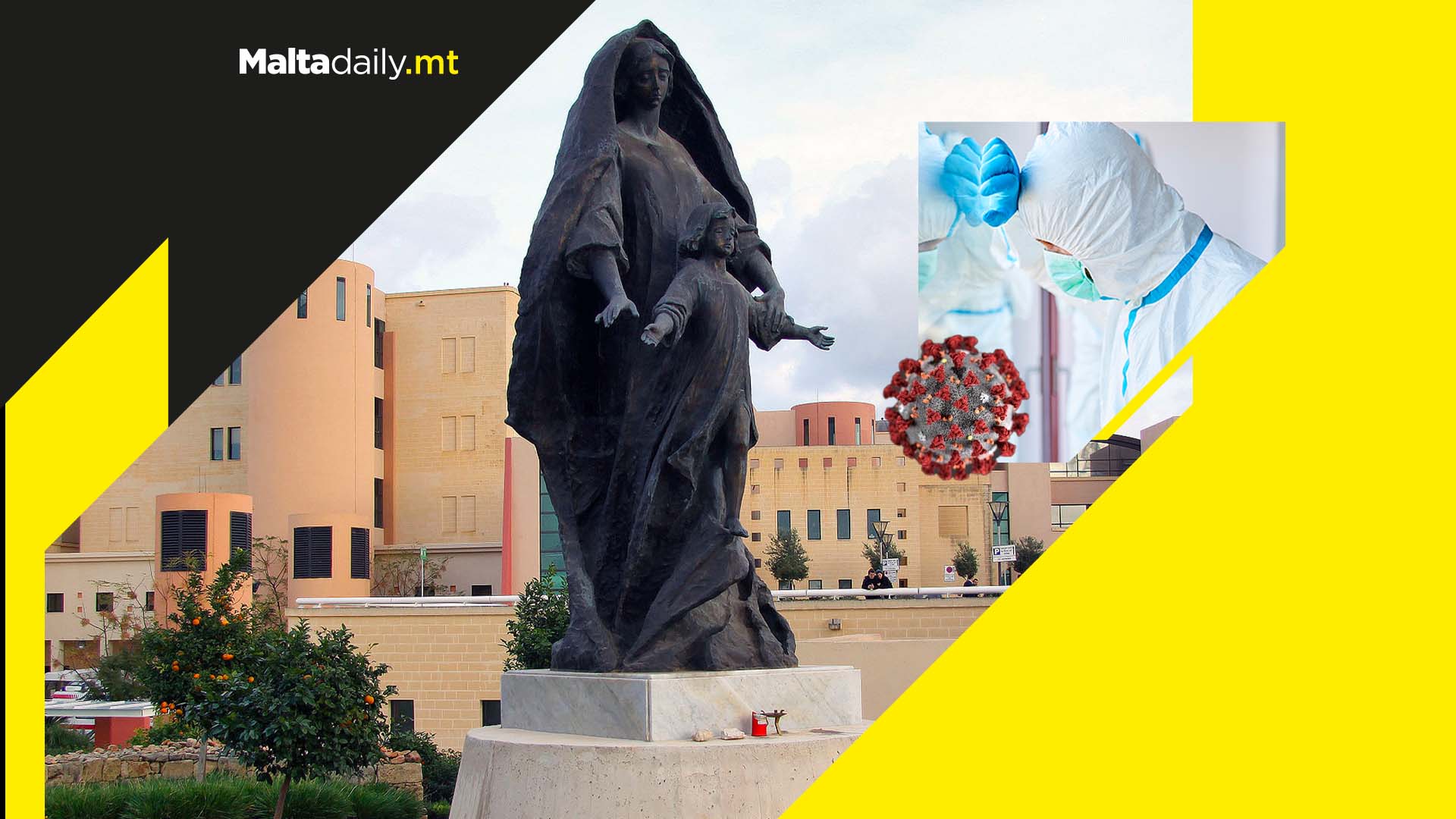 The Malta Union of Midwives and Nurses called for several new measures in light of the spike in active cases of COVID-19. The MUMN called for a postponing of non-urgent surgeries at hospital, a closure of bars as well as a curfew to fight the new surge.

The statement released on Wednesday said that measures such as wearing masks in public are just ‘political measures’ with no scientific significance. They labelled them as ineffective in reducing numbers, putting forth their own as a possible solution.

The union said that not only are all beds in Mater Dei filled, but that it is time to consider stopping non-urgent elective surgeries. When paired with the flu and other medical conditions, the situation at the hospital is being deemed very serious.

‘Allowing the country to run with no effective COVID measures demonstrates that the government is more inclined to appease the entertainment industry than the health professionals such as the nurses who are working under huge pressure’ the MUMN remarked.

With several nurses on sick leave or in quarantine causing a shortage of nurses, the MUMN accused the government of letting the hospital get overwhelmed with patients. The union also urged the public to avoid going to establishments for their own safety.

People reacted to this however, putting into question why other medical procedures should be stopped. With 5 people in the ITU due to COVID, some criticised the MUMN by stating that ‘not being able to cope shows more the lack of planning than anything else.’

‘Life must go on – as this will most likely last for few more years. Any measures implemented should be sustainable. Short term solutions only fulfil short term goals’ one said. 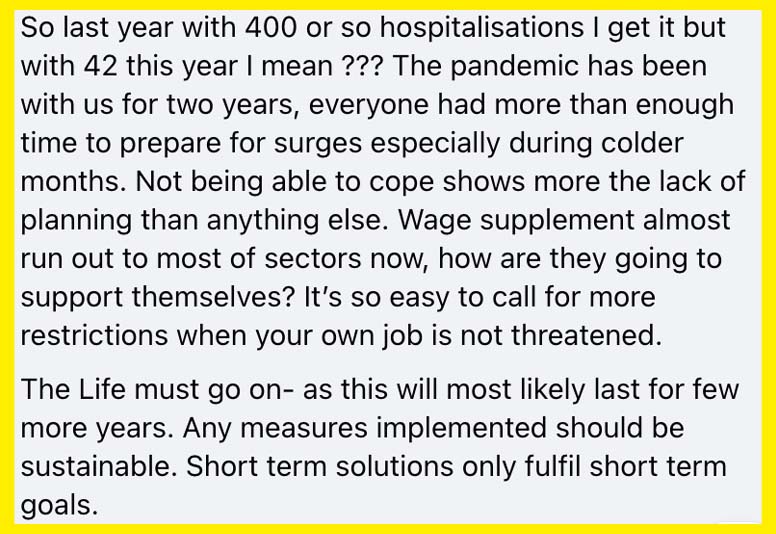 No new COVID restrictions for UK before Christmas Johnson confirms 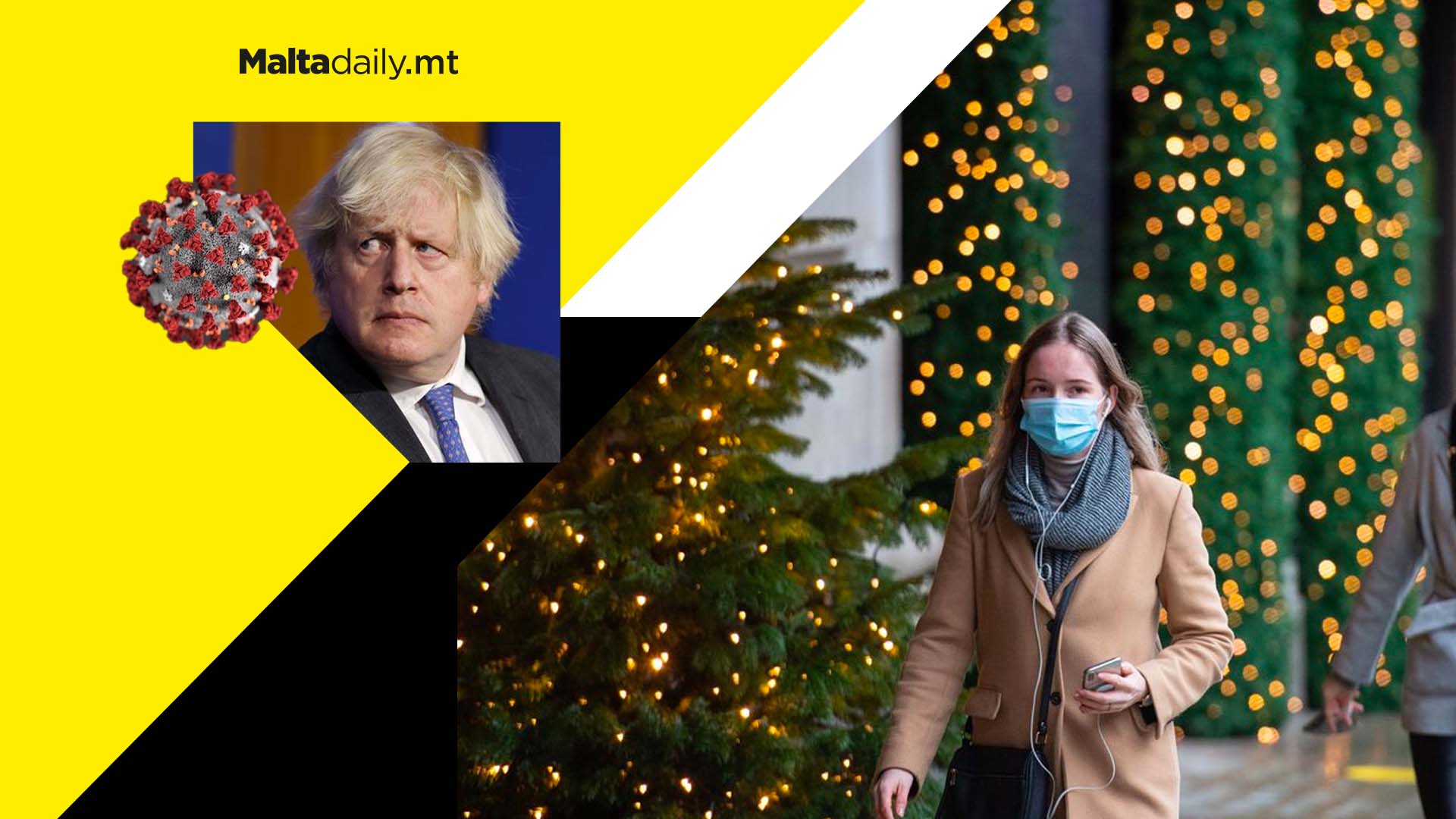 UK Prime Minister Boris Johnson announced that his government will not be introducing new pandemic restrictions before Christmas.

‘I wanted to confirm that people can go ahead with their Christmas plans. But we’re keeping a constant eye on the data and can’t rule out any further measures after Christmas’ he said in a Tweet.

The Prime Minister believes there is not enough evidence to justify introducing tougher measures, but he did not completely rule out new ones after the festive season.

He also highlighted how Omicron continues to ‘surge with a speed unlike anything we’ve seen before.’ He urged the public to exercise caution and wear masks indoors as per recommendation.

Johnson finally urged citizens to get their booster jab. This announcement comes after an emergency meeting on Monday, with the Scientific Advisory Group for Emergencies (SAGE) warning that waiting too long will reduce the effectiveness of any restrictions introduced. 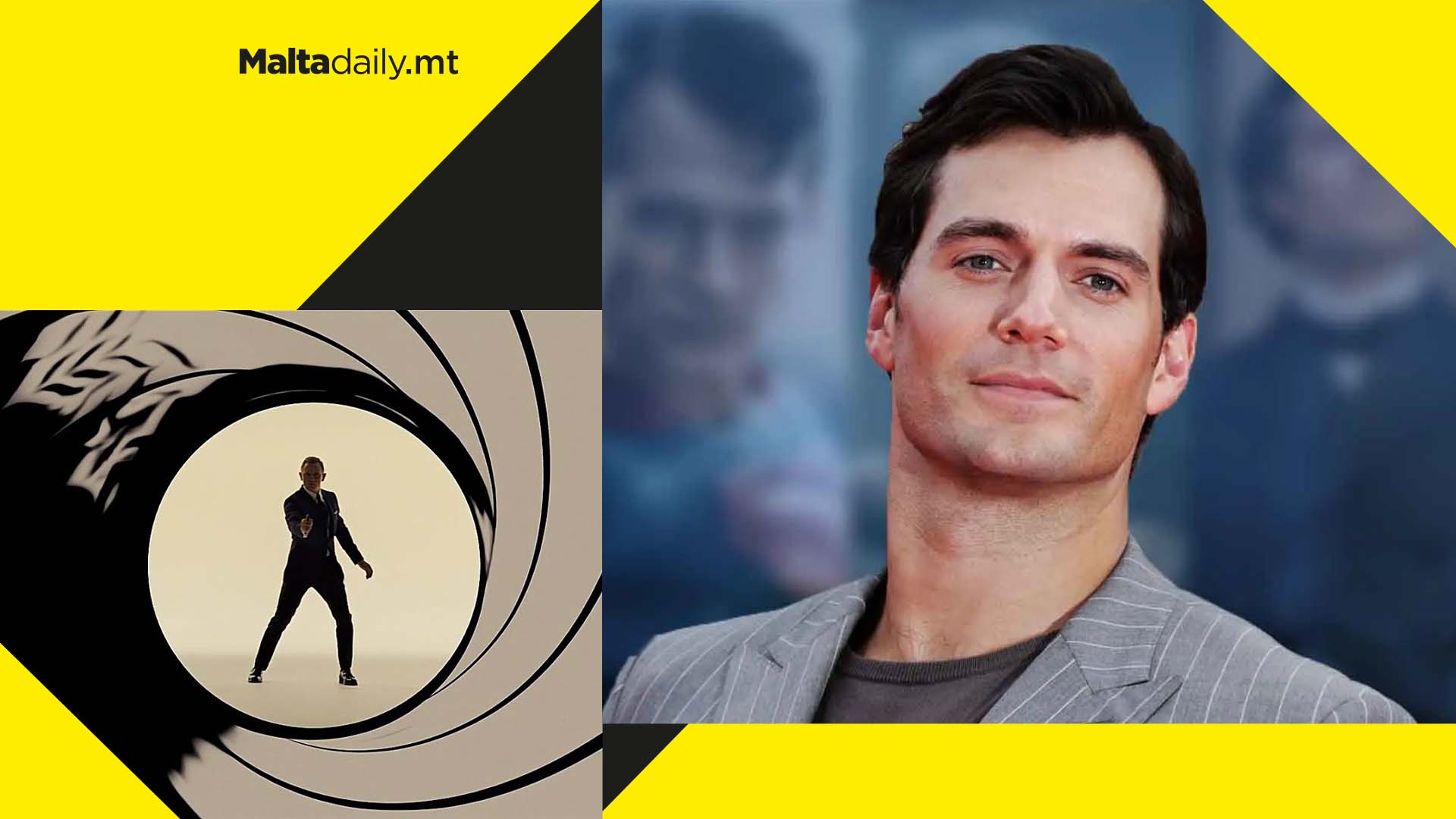 As the hype of Daniel Craig’s final Bond film ‘No Time To Die’ begins to wear off, big names in Hollywood will start to suggest or hint at potential successors for Craig’s now-vacant Bond Role and one director has called Henry Cavill the perfect fit.

The King’s Man director Matthew Vaughan, who has worked with Cavill on film Argylle, has stated that Henry Cavill is “everything you’d imagine Bond to have been, or be’, providing a major vouch for the face behind the Man of Steel and The Witcher.

Cavill is the latest addition to the Bond role’s seemingly-endless list of potential candidates which includes Tom Hardy, Idris Elba and Harry Styles, amongst others.

Do you think Henry Cavill would make a good James Bond?

Why is today the shortest day of the year and what happened at 4.59PM? 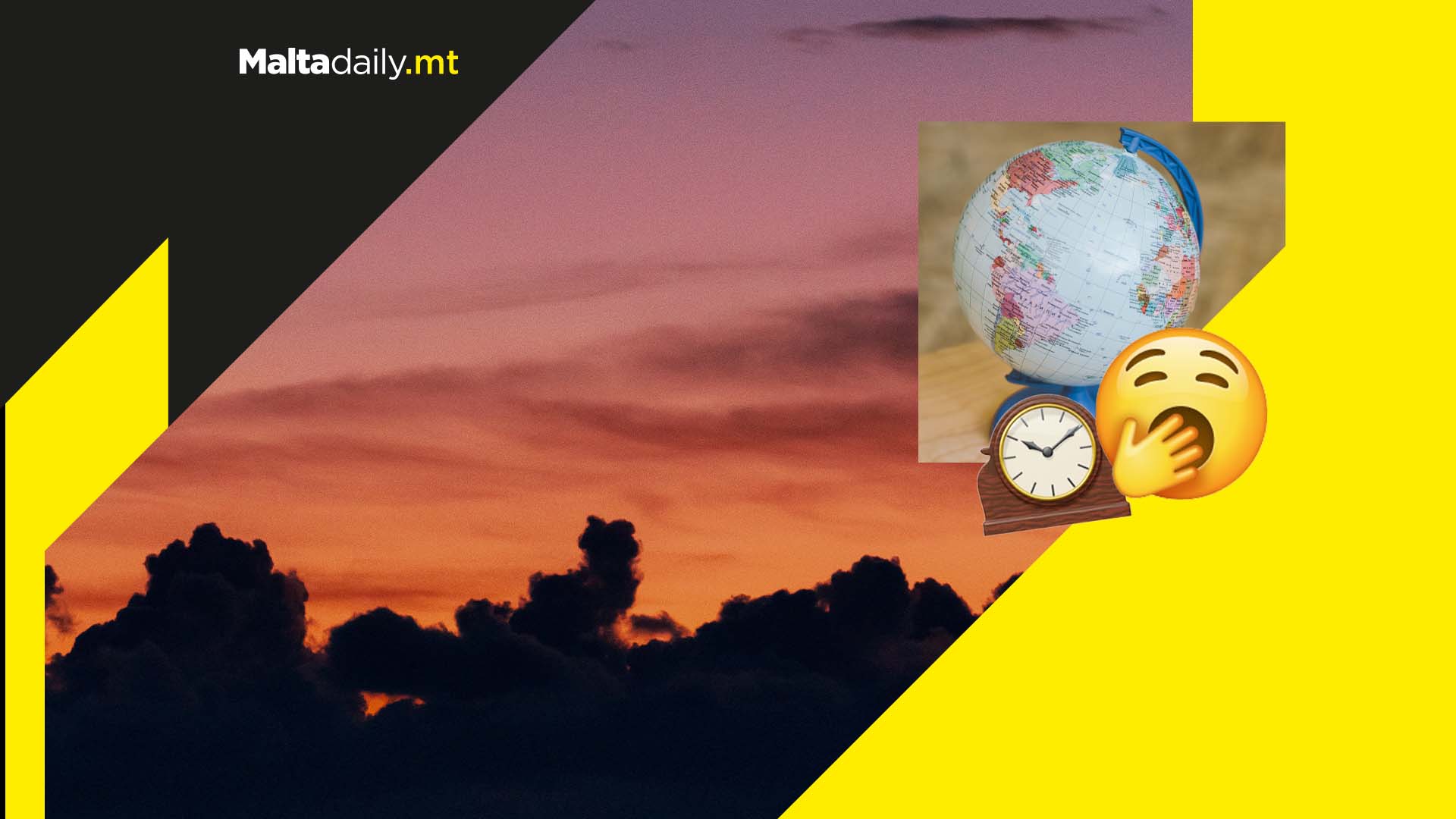 December 21st is an important day in the calendar year for a number of reasons, mainly because it is the day when we welcome the Winter season through the Winter Solstice.

As a result of this, December 21st is the shortest day of the year on the Northern Hemisphere and as a result, the longest night. As a result of this, Tuesday will have slightly less that 10 hours of day and around 14 hours of night after the sun rose a bit later than 7am and set slightly before 5pm. The Winter Solstice can happen over three days, between December 20th and December 23rd.

While this phenomenon welcomes the Winter Season in the Northern Hemisphere, it marks the beginning of summer in the Southern Hemisphere in countries like Argentina and Australia which are currently experiencing their longest day and shortest night of 2021.