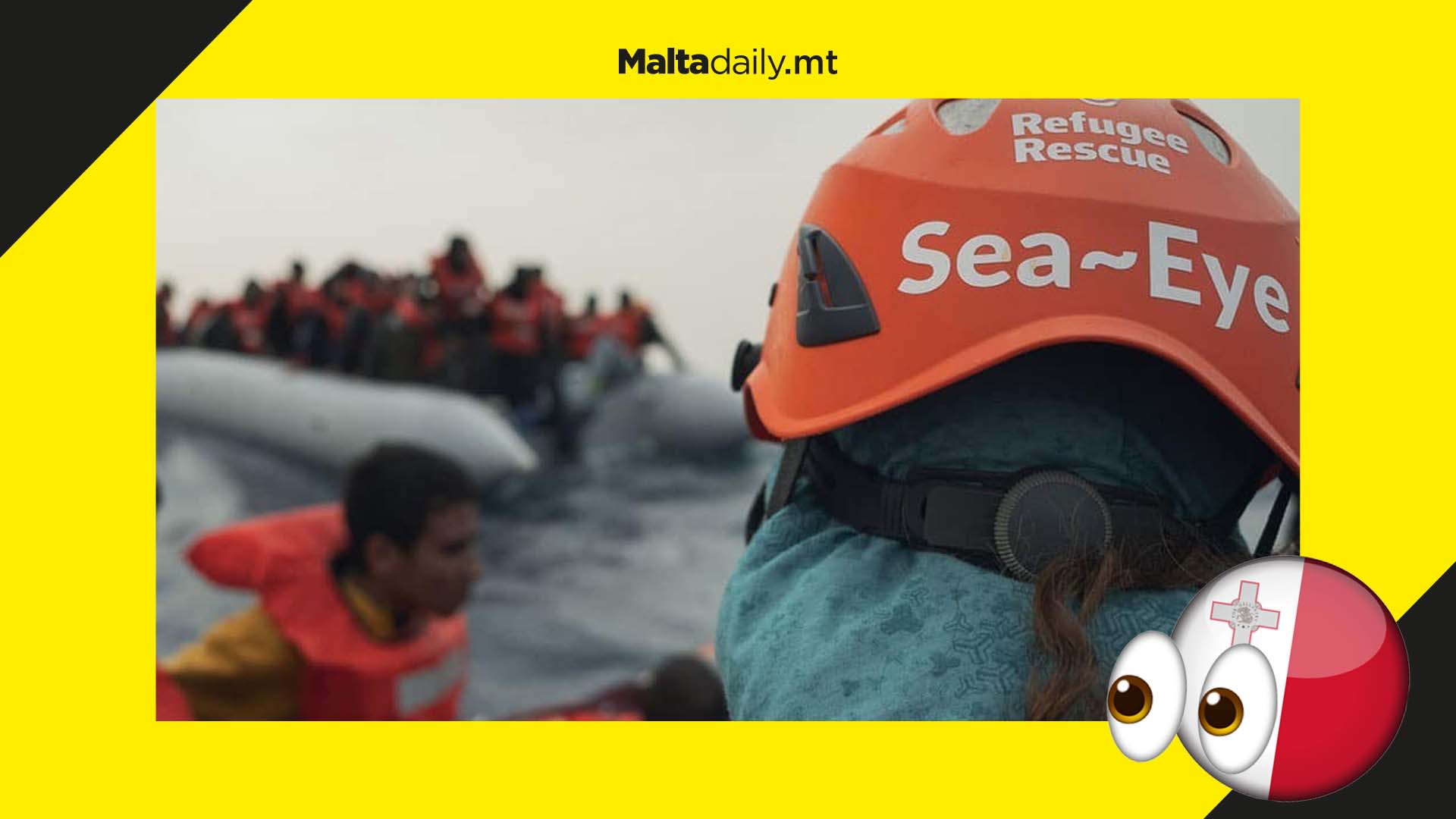 A boat filled with up to 450 migrants at sea have lands safely in Italy in the port of Pozzalo after it was revealed that Malta was refusing to coordinate a rescue mission.

Roberto Ammatuna, the Sicilian port-town’s mayor, announced the arrival and said that it was inevitable that the good weather brought by summer would prompt new arrivals over the season’s course.

‘It is now without question that a European military force in the Mediterranean but be ever present. The rescue of thousands of human lives cannot be the sole prerogative for some NGOs only.’

The boat sailed inwards from 30 miles out of Portopalo by Italian finance police. Another 57 asylum seekers were landed in Lampedusa, while another 145 are expected to arrive in August after being rescued by the Sea Watch 4 rescue ship.

Meanwhile, Malta was accused of having refused to intervene in a rescue of two boats with over 500 lives. Malta’s armed forces remained unresponsive, the migrant rescue charity Alarmphone alleged.

The island failed to coordinate or carry out rescues after two cases earlier this week, where people in Malta’s search and rescue were only recused due to the intervention of merchant vessels and NGO boats. Alarmphone said that in the case of another boat of 26 people, the AFM was actively encouraging merchant vessels not to respond to the distress signals of the people on board. 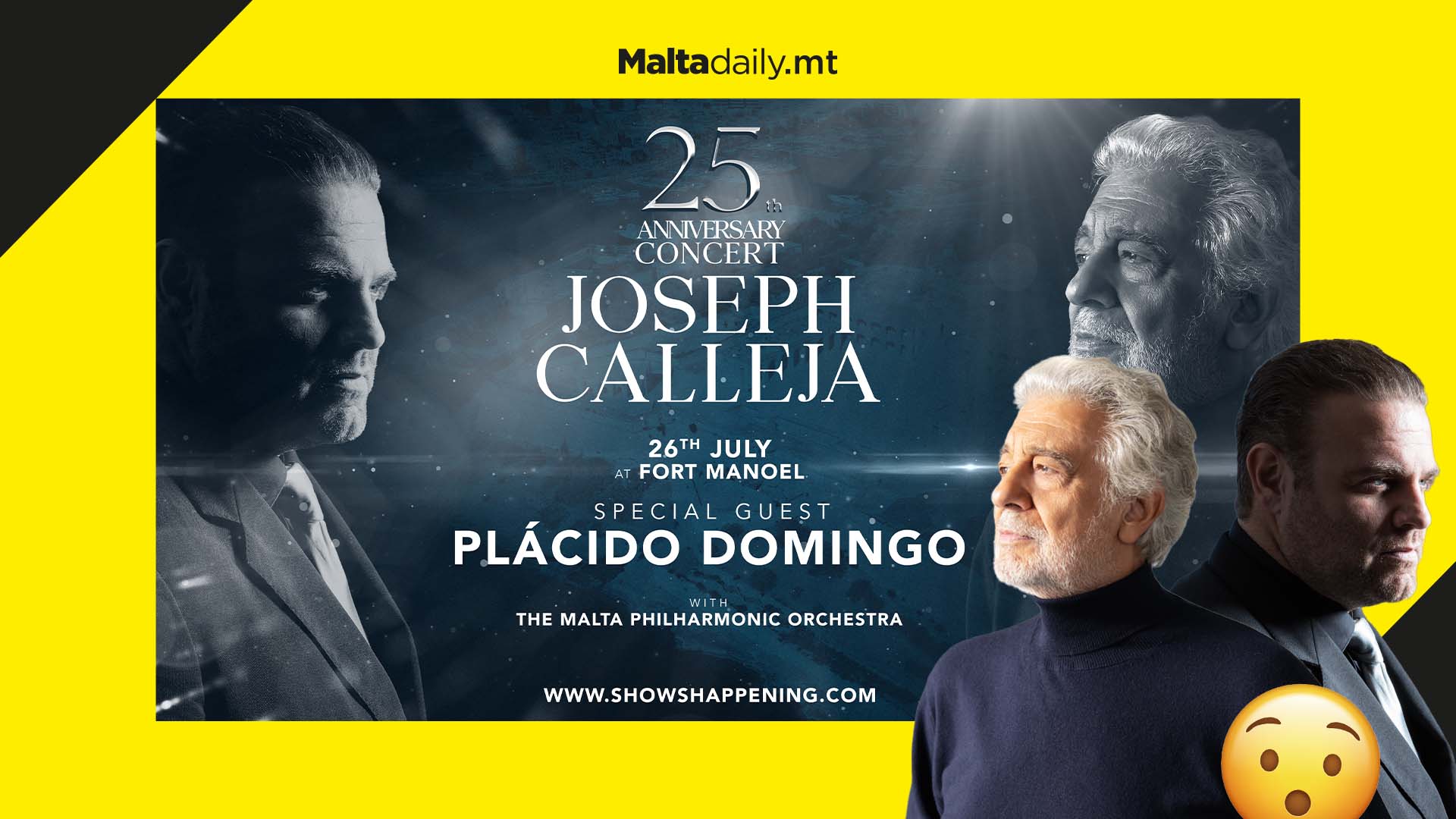 Opera legend Plácido Domingo will be Joseph Calleja’s special guest at the Maltese tenor’s 25th anniversary concert being held in the spectacular surroundings of Fort Manoel in Malta on July 26.

Acknowledged as one of the finest-ever singers, Domingo has almost reached 4,100 performances in a stellar career that has made him a household name both as a tenor and a conductor.

Calleja, who has just completed the recording of his sixth album for Decca Records on the back of a critically acclaimed run in New York, said:

“The Maestro needs no introduction. His talent, stamina and love for the opera world are revered the world over and what I can promise is that this will be a concert to remember. Placido and I have sung together abroad, but to perform with him in my homeland is a dream come true. My first big break in opera came in the 1999 edition of his annual Operalia competition and I have wanted to get him over to Malta ever since.”

Domingo said: “I am very happy and proud of Joseph’s beautiful artistic trajectory with his generous voice and admirable extension. I gladly welcome his invitation to participate in this concert to commemorate the first quarter century of his career! I was privileged to share the stage with Joseph on two memorable Simon Boccanegra productions and now I am thrilled at the chance of making my Malta debut with him, in his homeland!”

The Maltese tenor continues to grace the world’s leading opera houses and concert halls in his silver jubilee year which will see him perform in France, Germany, the UK and Australia among others.

Domingo, whose repertoire encompasses more than 150 roles, has continued uninterrupted his extraordinary artistic career for more than half a century and this year, after having sung in Madrid, Moscow, Paris, Palermo, Salzburg, Versailles, Buenos Aires and Budapest, he is expected to return to Italy, Austria, Germany, Japan, South Korea, Spain, Slovenia, Mexico and South America.

The fitting venue for this spectacular concert, which will also feature the Malta Philharmonic Orchestra, was originally built by the Knights in 1723 to defend Valletta under the patronage of Portugese Grand Master Manoel de Vilhena and underwent meticulous restoration thanks to Midi plc.

Joseph Calleja – 25th Anniversary Concert is being produced by Mint Media with the support of the Malta Tourism Authority, The European Foundation for Support of Culture, Bank of Valletta and Midi.

Malta Tourism Authority Chairman Gavin Gulia said: “When we speak of Maltese Cultural Ambassadors who – through their exceptional talent – give visibility to the Maltese Islands and their endless beauty, one cannot but not think of The Maltese Tenor Joseph Calleja. It gives us great pleasure, as Malta Tourism Authority to support Joseph’s 25th Anniversary Concert, which this year will be held in one of the island’s most beautiful locations, making the concert even more unique. Events such as this one continue to add versatility to the Maltese Islands, by enhancing the quality of the tourism product, reaffirming once more that there truly is something for everyone in Malta.”

European Foundation for Support of Culture President Konstantin Ishkhanov said:  “The EUFSC has been collaborating with Joseph Calleja for quite some time now, both nationally and around the world, and we are always very proud and honoured to team up with him, especially for such a special occasion as this. He is undoubtedly one of the best standard-bearers of Malta’s cultural heritage, and I am certain that this event will prove, once again, to be yet another memorable triumph.”

BOV CEO Rick Hunkin said: “The Bank’s support for the annual Joseph Calleja concert encompasses Bank of Valletta’s continued support of the local arts and culture scene as part of its Environment, Social and Governance (ESG) commitment. This annual concert is back and will showcase Malta’s top talents, along with other local and international stars while a large number of children will get the opportunity to perform alongside these great artists, and for some, their first opportunity on a stage through the BOV Joseph Calleja Children’s Choir. The concert has also been an opportunity to showcase the talents of the scholars of the BOV Joseph Calleja Foundation, the Bank’s collaboration with the Maltese Tenor to assist talented local artists to fulfil their potential and become Malta’s future stars.”

Blessed with a golden-age voice that routinely inspires comparisons to “legendary singers from earlier eras: Jussi Björling, Beniamino Gigli, even Enrico Caruso” (Associated Press), Maltese tenor Joseph Calleja quickly became one of the most acclaimed and sought-after tenors. His expansive discography and frequent appearances at the world’s leading opera houses prompted NPR to hail him as “arguably today’s finest lyric tenor,” and led to his being voted Gramophone magazine’s 2012 Artist of the Year. A Grammy-nominated recording artist for Decca Classics, he has released six solo albums for the label. Calleja makes appearances throughout the world. He has headlined the Last Night of the BCC Proms, was the featured soloist at the 2011 Nobel Prize Concert in Stockholm, performed before Queen Elizabeth II and Prince Charles, and sang for the justices of the US Supreme Court at the invitation of the late Ruth Bader Ginsberg. Calleja has previously performed with Placido Domingo in the US and UK as well as Vienna, Salzburg and Hungary.

Singer and conductor, tenor and baritone, pronounced a Renaissance man. Awarded with honorary titles and prestigious prizes also for his humanitarian commitment and for his worldwide promotion of Spanish cultural heritage and zarzuela. Performer of world premieres, promoter of young talents, founder of Operalia, winner of 12 Grammy’s and starred in opera movies, beside singing he is a conductor with more than 600 performances. Since 2009 he has been playing major baritone roles. Extraordinarily eclectic he was one of the legendary Three Tenors and he has held institutional positions. Acclaimed by the public around the world, his incredible artistic career has continued uninterrupted for more than half a century and for this incredible milestone he has been celebrated at the Metropolitan Opera, Wiener Staatsoper, Arena di Verona, Teatro alla Scala and Teatro Colón. Many future commitments await him on four continents and they promise to be memorable.

Tickets are available from www.showshappening.com

11,000 people crossed between Malta and Gozo by end of last week 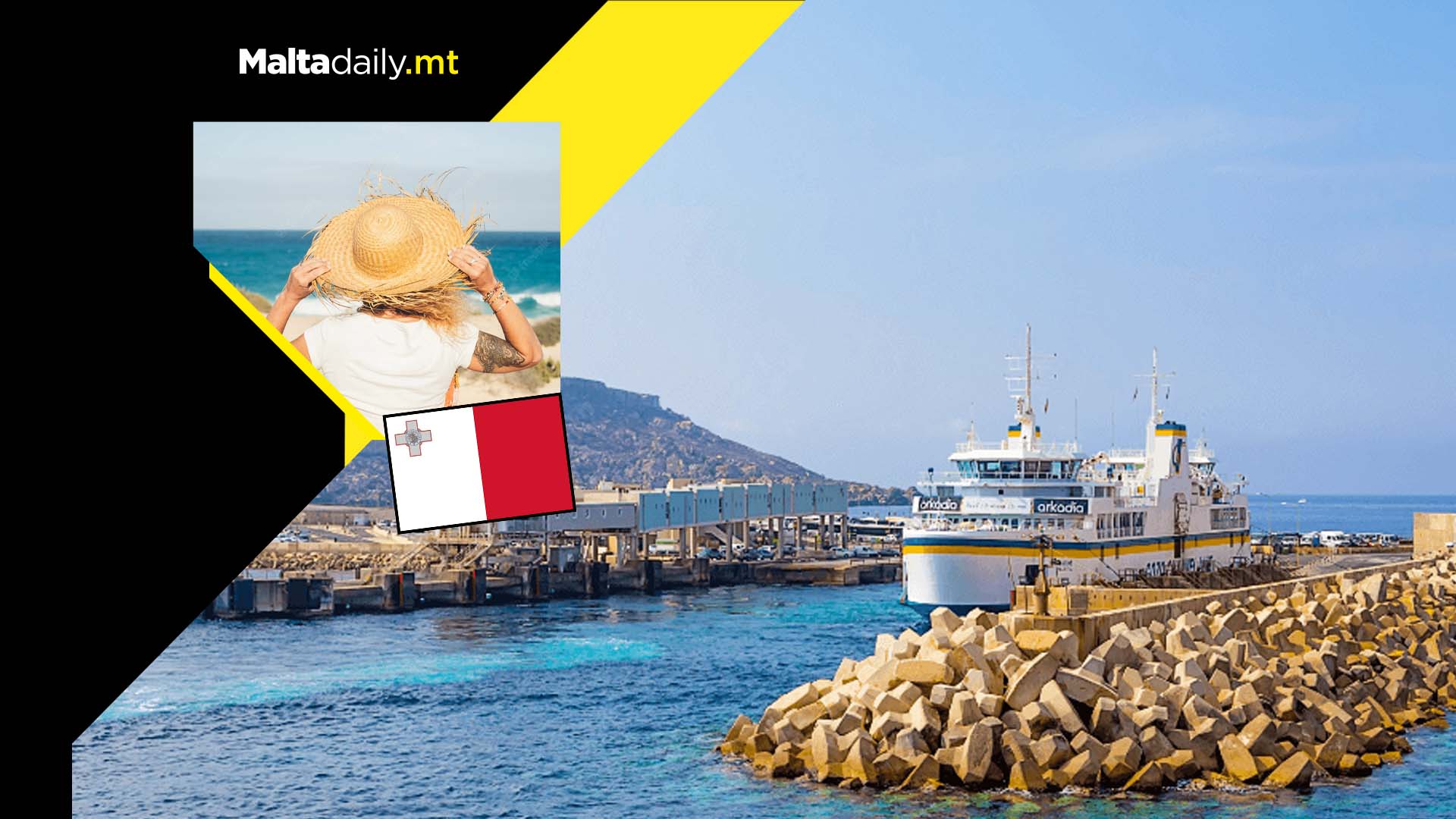 Between Friday 13th and Sunday 15th May 2022, 11,000 people crossed between Malta and Gozo using the Gozo Channel ferries.

The statistics were revealed by Gozo Channel chairman Joe Cordina in comments to ONE News. He went on to explain that as the weeks go by, the number of people using the ferries is only set to increase.

More and more people are travelling between the two sister islands every weekend. Comparing the numbers to pre-pandemic levels, Cordina forecasted that the numbers will skyrocket given that carnival will be celebrated this upcoming weekend.

The next few months will be very positive for the tourism sector in Gozo as Malta reopens fully to an influx of travellers after two years of lockdowns and restrictions. Cordina said that the positive atmosphere of tourist influx can already be felt by the owners of restaurants and hotels.

Joe Muscat, the Chief Executive for the Gozitan Tourism Association, confirmed the sentiments as well, saying that every weekend is seeing an increase in tourists travelling to the island and stimulating the economy. 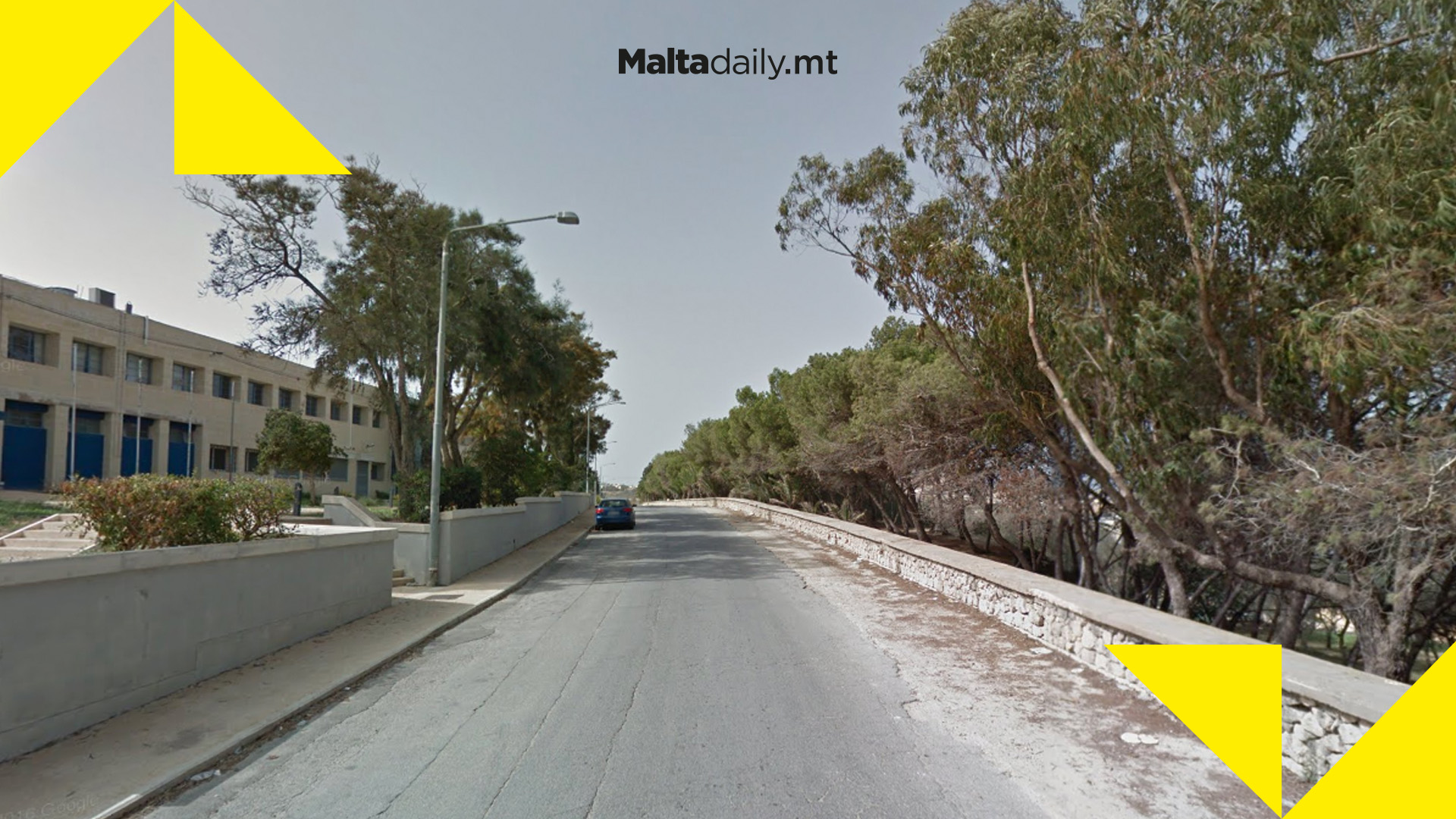 A 63-year-old motorcyclist has sustained serious injuries after colliding with a Mistubishi Pajero in Triq is-Tessuti, Xewkija, Gozo.

The incident took place at 9:40AM on Tuesday, with preliminary investigations conducted by the Malta Police Force revealing that the Yamah 250 motorcycle was driven by the 63-year-old man from Xagħra and the Mitsubishi Pajero with which the motorcyclist collided driven by a 66-year-old Sannat resident.

The motorcyclist was given immediate medical assistance, taken to the Gozo General Hospital via ambulance where he was certified to have sustained serious injuries.

An inquiry into the incident has been opened, with police magistrate Dr Simone Grech appointing a number of experts to assist in the case.